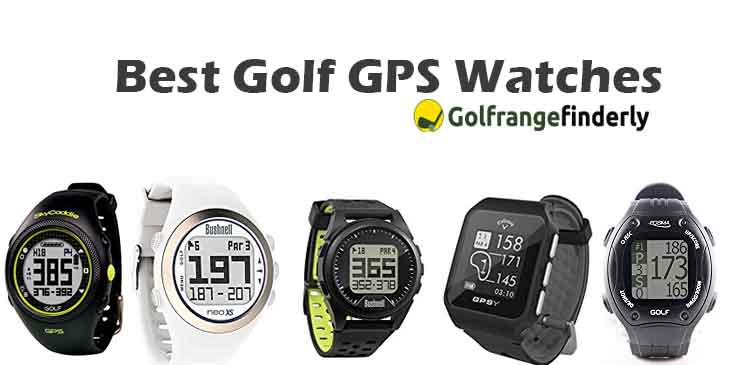 After testing and analyzing the results of top GPS watches, the best Golf GPS Watches 2018 are: The Best Golf GPS watches of 2018 can improve your game in many ways. It particularly gives you the most accurate measurement readings, taking out the guesswork out of your game. With it, you will be able to learn your distance to the hole as well as other parts of the course.

With a Golf GPS watch, there’s no need for you to make blind shots. You can hit a shot and have the ball land on wherever you want it to go.

You will be able to detect nearby hazards such as bunkers and water. And you can play faster with more efficiency when you have a GPS watch worn on your wrist.

The Bushnell Neo Ion replaces the Neo XS GPS watch which came out in 2014. I’ve used that once and I was so impressed with how lightweight and compact it was.

This one builds on that excellent design of the Neo XS, but has a longer battery life than its predecessor.

It is also easy to navigate that I think any golfer won’t have troubles using it.

This GPS watch can last three full rounds, which makes it a great watch for golfers who often forget their device after playing. Moreover, it comes fully charged right out of the box. You also don’t have to sync it up to your computer, too.

I like that this unit automatically detects your course the first time you use it, and then moves holes as you do. In case it doesn’t, you simply have to push a button to set things right. Also, you can put it on before teeing off and not have to press another button.

In terms of accuracy, I have no complaints about this watch. I compared the distance measurements versus my buddy’s Bushnell laser, and the readings were practically the same.

And I love wearing this watch. It is simply comfy. It has a soft and flexible strap which I think will give most wearers a snug fit. I didn’t really feel uncomfortable while wearing it.

I really have no complaints on this watch although from what I’ve read on Amazon.com, some users say this isn’t the most durable GPS watch.

I haven’t had the chance to use one, but basing on the comments posted on Amazon.com, this is one of the best Golf GPS watches for this 2018 .

Golfers who’ve had the chance to wear one say it is light, accurate, and very easy to operate.

You don’t really need to be a techie in order to operate this GPS watch. You would likely learn how to use it by trial and error without spending too much time because of its three button interface.

There’s a manual included, although many reviews on Amazon.com say it isn’t that helpful. It’s a good thing that the watch itself is easy to use.

According to most reviewers on Amazon.com, this is a very accurate GPS watch for this 2018. They say that they’ve compared its readings with laser rangefinders, particularly in measuring hazards. Overall, the reviewers were pretty much satisfied with the performance of the GPS watch.

Other golfers are raving about the excellent battery life of this GPS watch. They say that it can last up to 12 hours in golf mode.

When in time mode, the battery life can stretch up to 90 days. There are also other reviewers who say that they like its added features like stat tracking.

Like most Golf GPS watch , this unit is preloaded with more than 30,000 courses. In terms of price, it’s a mid-range gps watch.

The major beef that users have with this unit is that setting it up is a bit tricky.

The brand is a relatively new entrant to the Golf GPS watch market.

It isn’t the top rated Golf GPS watch on Amazon.com, and I can understand that given that you’ll have to pay annual fees to use it.

Poor battery life is a common concern, while some say that it isn’t as user-friendly as other golf GPS watches. Surprisingly, it gets some good feedback for being very stylish.

It would only take a few minutes to set up the SkyCaddie, from registering, downloading, and installing the CaddieSync Express.

Aside from the membership fees you’ll have to pay to use this watch, another concern that Amazon.com reviewers with this watch is that it doesn’t come with a wall charger provided.

There are five buttons in this watch, although there’s no button for switching it on/off since it is always on.

While you might not like the idea of a 0.8 square inch black and white screen, many reviews suggest that it is easy to read. You can also adjust the backlight on the watch to remain on for up to 20 seconds.

The brand says that this unit’s battery can last 10 hours while using its GPS, but many reviews on Amazon.com belie those claims. The golfers say that it can only last around 7 hours, and they aren’t exactly happy about it.

If you are looking for a budget-friendly golf watch , then you should consider this unit.

It is an entry-level golf watch that according to most reviews is well constructed and fits on the wrist very well.

But it’s not the best watch in terms of ease of use and battery life.

This waterproof golf watch is lightweight, measuring just 2 ounces. According to those who have used it, the GPS watch feels solid in their wrist. They say it is comfortable and doesn’t really affect their swing at all.

The display is also easy to read, according to some Amazon.com reviewers. They say that it helps them track how far they are from the greens.

However, a majority of the reviewers on Amazon.com find this GPS watch to be very difficult to operate. The instruction manual, they say, is very confusing. They even wonder how a company could have come out with a poorly written user’s guide.

According to the company, this watch would last 8 hours in play mode. But many disappointed users say its battery life doesn’t last long. One reviewer points out that the watch wasn’t able to make it through an entire round despite having charged it the night before.

This is a very budget-friendly GPS watch, to be sure. It’s also very lightweight that you won’t notice that you have it on your wrist. But you’ll have to deal with some issues pertaining to its battery and ease of use.

As mentioned earlier, this isn’t the newest model in Bushnell’s roster of rangefinders. But this doesn’t mean that it’s a bad choice.

On the other hand, I am sure that the budget-conscious shopper will find this gps watch a great buy.

It has a very decent line-up of features plus a pocket-friendly price.

As I have revealed earlier, I have had the opportunity to use this before. It’s one of the lightest GPS watches that I have ever worn. I weighs just 0.8 ounces, and there were times I didn’t realize I had this on my wrist.

It has a very small screen, but I didn’t have any problems seeing the display. I would have to tank its suboptimal backlighting for that.

When I push any button, the LCD is illuminated well. The backlight remains on for around 10 seconds. It’s just bad that you can’t make the 10 seconds longer.

With five buttons and no touch screen, there should be no problems for you in navigating the menu of this watch. I really find its user interface intuitive. I hardly read the manual—which just shows how easy it is to use this device.

The XS also has lots of really good features such as auto advance, shot tracking, and scoring.

If there’s anything I hated about this, it would have to be the lack of a wall charger. I had to use the cable for my smartphone in charging it.

There you have it—five of the top rated golf gps watch on Amazon.com. I believe any of these watches will help you improve your game the next time you hit the golf course.

It’s hard for me to pick a clear-cut favorite although the Bushnell watches are really good. But it’s really up to you to determine the best Golf GPS watch of 2020 in this list. All I know is that these watches are very easy to use, compact, and relatively accurate.

This site uses Akismet to reduce spam. Learn how your comment data is processed.