We may receive commissions when you click some of our links and make purchases without extra cost of you. However, this does not impact our reviews 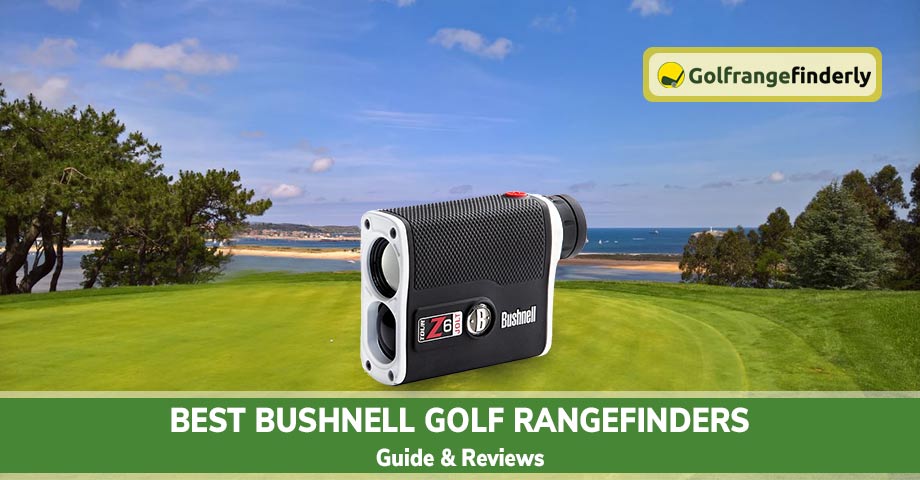 Bushnell both has laser and GPS rangefinders.

Its laser rangefinders are backed by a two-year warranty, while its GPS rangefinders have a one-year limited warranty. While Bushnell is known to have very pricey rangefinders, you’ll get your money’s worth whatever model you purchase.

The Bushnell Tour V3 isn’t exactly the newest rangefinder from Bushnell, but this doesn’t mean that you should overlook it.

More than three years since it was launched, it still remains a top-rated rangefinder.

I personally think that if you are on a budget but still want to purchase a Bushnell model then you should get this one.

The Bushnell Tour V3 has a flashy, red/black/white design. It’s a marked improvement from its predecessor, the Tour V2.

Its frame is also more ergonomically designed than the older Bushnell rangefinder. It fits well into my hand. While I have really no complaints about the design of the V2, I can say that the V3 is a lot better and more comfortable than its predecessor.

The Bushnell Tour V3 is equipped with the brand’s patented JOLT technology. This feature is something you’ll find in most of the rangefinder models in this list. It makes the unit vibrate when it locks onto a target.

While some golfers aren’t exactly impressed with this feature, I like it because it enhances the use of the rangefinder. I say it’s a cool feature that makes the rangefinder more user-friendly.

Another thing that impressed me is the long battery life of this rangefinder. I haven’t changed its battery ever since I bought it a year ago. Although I am not really using it that frequently, the battery life is still impressive.

If there’s something I didn’t like about this rangefinder, then it would have to be the case. The case of the V2 was a lot easier to open.

As I have mentioned, Bushnell is not really known for having affordable rangefinders.

The Tour X may be pricey but you’ll be getting your money’s worth when you get this unit.

The Tour X actually replaced the Tour V3 as the brand’s flagship rangefinder in 2015.

There are several features of the Tour X worth mentioning.

The main selling point of the Tour X is its Exchange technology, wherein two interchangeable faceplates are placed on the end of the device. When you use the black faceplate, the unit becomes a non-slope rangefinder that you can use in tournament play.

The other faceplate is red, with a plug-in that activates the technology of the Tour X for slope-adjusted distances. Naturally, you can’t use the unit for tournament play when the red faceplate is on.

This makes the Tour X rangefinder one of the few models which pros and amateurs alike can use, for tournament play as well as practice.

The Tour X is also hard to beat when we talk of speed and accuracy. Equipped with Bushnell’s ESP (Extreme Speed Precision) technology, it is capable of providing measurements up to five times faster and more precise than ever before.

Like its predecessor, it is also equipped with the JOLT technology of Bushnell. From what I have gathered from Amazon.com comments, most users of this rangefinder are happy with the said feature.

The only real drawback of this rangefinder is the price. But again, you can’t blame Bushnell for pricing it a bit steep because of its superior features.

Like the V3, the Tour Z6 builds up on the good qualities of the V2.

It has faster readings and a better looking design than the older model, apart from a waterproof shell.

Perhaps more importantly, this rangefinder isn’t as pricey as the Tour X. I highly recommend this to golfers who want a quality Bushnell rangefinder but couldn’t afford the very pricey Tour X.

I’ve only had the opportunity to use the Z6 once but I was impressed with how easy it was to use it. There are only two buttons in this rangefinder.

Located on the top is the red power/laser button which you press to activate the device and fire the laser. On the left side is the mode button which lets you access the setup menu.

I remember that the display of the Z6 is clear and easy to read. There’s a slight tint which I found effective in reducing glare. It has a 6x magnification, which has become a standard for rangefinders these days.

The Z6 has Bushnell’s Vivid Display technology, allowing it to display information in red. I found it easy to read against dark backgrounds.

I also like how compact and lightweight the unit is. It weighs less than 8 ounces, and around 11 ounces when the carry pouch is included.

Should you get a laser range finder or a GPS rangefinder?

If you still haven’t made up your mind, then why don’t you get this hybrid rangefinder from Bushnell?

As the name indicates, it is a hybrid rangefinder—giving you the best of both worlds, so to speak.

At the onset, let me tell you that this rangefinder is also expensive. Its price tag is a lot higher when you compare it to the average laser rangefinder. But is it worth the price? Let’s take a closer look at this unit:

Since it is a hybrid model, this Bushnell rangefinder is slightly heavier than the Tour V3. But it is still compact that you should be able to fit it in your pocket. The added weight doesn’t really make it troublesome to carry around. It measures 2.1 x 2.6 x 4.3 inches.

It also has auto hole advance and auto course recognition. Moreover, you don’t have to pay for membership fees in the US, Europe, Canada, and other parts of the world.

However, this rangefinder curiously doesn’t have the slope and the Jolt technology features found in other Bushnell rangefinders. I am certain that pros won’t really be disturbed by that. As you very well know, rangefinders with slope function are forbidden in tournaments.

The only thing I didn’t like about this unit is that when you use the GPS function, it can quickly drain the battery.

This is the latest rangefinder model from Bushnell. It’s not as expensive as the V3, which is a pleasant surprise for many budget-conscious shoppers.

In terms of features, it can match up with the best that Bushnell has to offer.

The V4 is a lot smaller than its predecessor. It is also lighter than the V3. It won’t add a lot of weight to your bag. Many reviewers on Amazon.com are happy that they were able to snag a lightweight rangefinder, although I found it too small for my taste.

As expected, Bushnell incorporates its key technologies in this unit. The Tour V4 is equipped with the Pinseeker and Jolt functions. These programs make the V4 accurate and very easy to use.

Another key feature of this rangefinder is that you can turn on/off its slope functionality. Thus it is designed for pros and amateurs, like the Tour X.

Curiously, this is not a water-proof rangefinder. It is only water-resistant. Thus it isn’t that reliable when exposed to extreme weather unlike other premium Bushnell rangefinders like the Tour X and even the Z6.

I can say that the Tour X remains as the crème of the crop in Bushnell’s line-up of rangefinders. The only real concern for the typical buyer is the price. It’s really very expensive that I would think twice about purchasing it.

The Tour X may be the best Bushnell golf rangefinder, but the other units in this list aren’t pushovers. You could choose from any of the four other models and still get a lot of help the next time you head to the golf course.