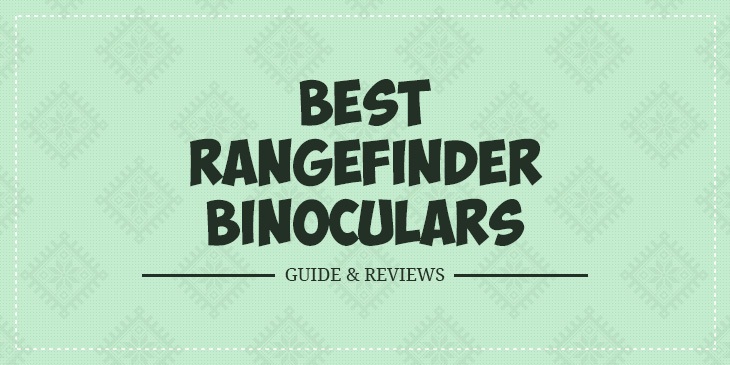 In choosing a rangefinder binocular, there are certain factors that you must consider. These include durability, visible range metrics, good line of sight, and user-friendliness.

Bushnell rangefinders are known for their superior build quality and advanced features. This binocular laser rangefinder is a good example.

It is compact and lightweight, with advanced ranging modes and equipped with flip up lens caps.

While this one is mainly marketed for hunters, the unit can also be used in other activities such as bird watching and traveling.

I find this rangefinder binocular to be compact and light. It feels solid in hand, and does not have that plastic feeling that other lower priced binoculars have.

If there’s something I hated with its design, then it has to be its focusing knob. I found it to be hard to reach. The diopter setting, meanwhile, can be easily adjusted unintentionally.

One of the best things about this laser rangefinder is the integration of various modes, which allow the user to adjust the ability of the unit to read a distance depending on certain scenarios. For example, the Bullseye mode allows the rangefinder to indicate which is closer between two objects.

This isn’t the most affordable rangefinder in this list. I also don’t like that it would take a long time for the unit to show readings for 1200 yards or more.

This is another highly recommended waterproof rangefinder binocular.

It is designed for all outdoor activities like hunting and boating.

It has an advanced 7x magnification, with BAK-4 prisms for crystal clear images.

It also has a non-slip, ergonomically designed rubber body so you won’t likely drop this while you are in the woods.

Generally speaking, I found this binocular easy to use. The built-in rangefinder helps in finding directions, which would come in handy when you are out in the woods. There’s also a directional compass for this purpose.

I am also satisfied with the clarity of the pictures, which can be attributed to the close focus of the binocular. This is an ideal companion during boating trips because of its waterproof quality.

Despite those outstanding features, there are certain things I wished that BARKA could have done away with this unit. For one, the compass doesn’t really make much of a difference. I also hate it as it blocks part of my view on the right side.

I’ve read that some Amazon.com users, however, like it because it works even in the Southern hemisphere. Barka says it doesn’t work down south, but some users say otherwise (which is actually a bonus).

Having to adjust lenses individually can also be very frustrating for most hunters. However, I have read on Amazon.com that there are those who like it, especially those with less than perfect vision.

Uscamel may not ring a bell like other brands such as Nikon and Bushanell, but it is a company that you can trust.

It is a brand that has been in the high-performance sports optics market for more than a decade.

Many of those who have used or tried their products say Uscamel their devices work perfectly well, even after years of use. This waterproof HD binoculars isn’t the best in this list, but it is a pretty decent choice for budget-conscious shoppers.

Right out of the box, I noticed how well-built this binocular is. I was curious if it is really waterproof, so I immersed it in the tub for an hour. I dried them after an hour. I was surprised that there was no fogging at all. There was also no drop in the image quality.

Ucamel also throws in a carry case which is quite rugged along with a lanyard with this product. The instruction manual is a bonus, because you don’t really need to be a techie or veteran user of binoculars to be able to find out how to operate it.

This binocular rangefinder has quick fold down eyecups that makes them easy to use. It also lets my wife, who doesn’t wear glasses, to quickly use it once I pass it to her during our camping expeditions. Also, it would only take a split second to adjust the binoculars.

It does come with a compass which is common among high-end binoculars. You can illuminate that by holding a button.

Bushnell rounds out this list with this entry level rangefinder. This rangefinder is affordable and versatile enough that you can also use it in other activities like boating and golfing.

Accuracy may not be the biggest strength of this rangefinder, but it is still decent especially for casual hunters.

And since the company behind it is known for being a good optics brand, you can’t frown upon the laser technology of this rangefinder.

Equally surprising is that this rangefinder has a 6x magnification, which is impressive for a low priced unit. Although it has a rather disappointing 550 yard range, it is still good enough for most casual users.

This rangefinder weighs just 4.4 ounces without the batteries. It measures 3.6 inches by 2.9 inches by 1.5 inches. I find it very compact and lightweight. I don’t have any problems holding it in one hand, although some of the golfers with big hands complain that it is too small for them.

Again, this rangefinder isn’t packed with features but it is very decent to say the least. It has a distant target priority mode that allows it to display measurement of the furthest object. It comes in handy when you are looking for a target hiding behind the grass.

It also has an auto shut-down feature that saves battery life, when it detects inactivity for eight seconds.

This sturdy and waterproof rangefinder may not be a high-end product by any definition, but I am satisfied with it. Many reviewers on Amazon.com share the same sentiment.

This isn’t the top rated rangefinder binoculars on Amazon but I found them decent and affordable.

It is a binocular that you can bring on your next fishing and hunting expedition, with a good 7x magnification.

Weighing less than two pounds, I found this waterproof floating binocular to be very lightweight. I had no problems putting it inside my bag. I also like its non-slip and ergonomic rubber design. It gives a very secure grip, even during times when it is raining so hard outdoors.

I remember the one time I used this binoculars during a boating trip. I dropped it in the water and was surprised that it rose to the surface and floated. This makes this unit a really good companion for during your trips to the beach.

Moreover I like its camouflaged design. It’s appropriate when you go on a hunting expedition. The manufacturer throws in a carrying case, lens cover, and neck strap to go along with the binoculars.

In terms of performance, the rangefinder works just fine. It has a 396 field of view which I found to be nothing out of the ordinary. The rangefinder offers a rough calculation of the distance of the target from the user.

The BAK-4 prisms, on the other hand, offers clear images. It doesn’t give the clearest images, but for the casual user this should be good enough.

Shopping for a rangefinder binocular isn’t exactly the easiest thing to do. With the many models available both online and in sporting goods stores, you could get easily overwhelmed.

Aside from the number of choices, the fact that most rangefinder binoculars look eerily the same could make you randomly pick out a unit.

However, with these rangefinder binoculars listed above, you will have an easier time choosing a device that suits you.

This site uses Akismet to reduce spam. Learn how your comment data is processed.